Wedding photographers have seen it all, and according to them, these are the signs a marriage won't last according to Huffington Post:

1. One of the partners is completely uninterested in photographs.

“Not everyone is interested in photography. In fact, I sometimes meet clients whose fiancés are interested in everything except being photographed on their wedding day. Luckily, most reluctant subjects know that photography is important to their partner and so they participate willingly. But that’s not always the case. Early in my career, a groom hired me by phone. When I arrived at the wedding and introduced myself to the bride, she gestured toward my camera and said, ‘Don’t point that f**king thing at me today!’ That made it a pretty rough day. They divorced three months later. I think that a willingness to happily consider the needs of your partner is key to a fulfilling, long-term relationship. And that includes embracing photography even if being photographed isn’t your favorite thing.” ― Rob Greer, a wedding photographer in Los Angeles, California 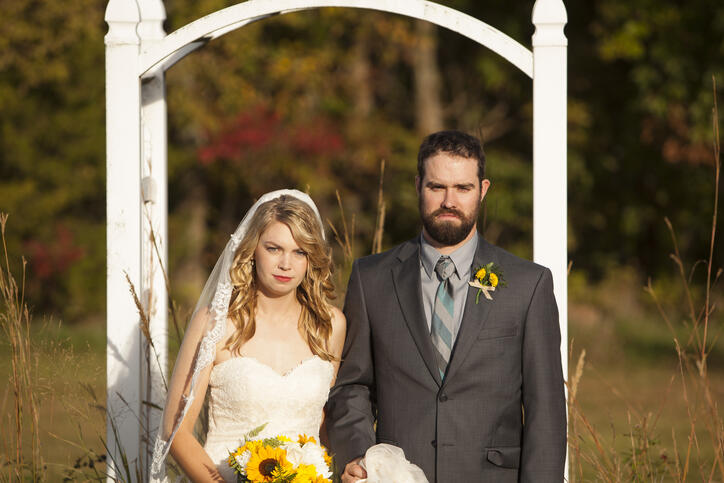 2. The couple has more than a 20 percent rejection rate on their RSVPs.

“It is very common to have about 10-15 percent of your guests unable to attend a wedding, but when you get above 20-25 percent, you should start looking deeper. It’s a telltale sign that your friends and family know that the couple is never going to work out! It’s sad, but so unbelievably true. The outside perspective is the tell-all about your relationship. I was photographing a wedding where the couple invited 250 guests, paid the venue minimum of 200 plates and only 60 people showed up! That same couple came up to me and asked me if I wanted to invite my wife and kids to the reception because they paid for all these dinners and no one came! I just recently found out that the couple has since been separated.” ― Brian Delia, owner of Brian Delia Photography in Clifton, New Jersey 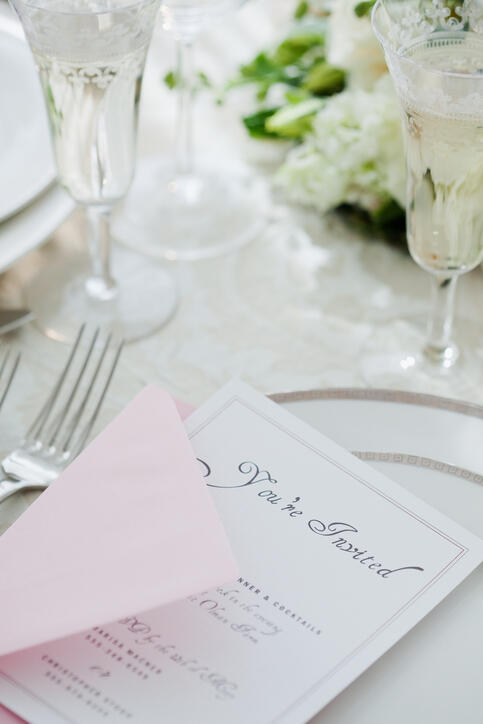 “It’s a bad sign when I’m photographing the couple and one of them overcompensates for the lack of interest from the other person. Maybe they have looked through hundreds of online photos and want their wedding images to look exactly like their Pinterest boards. Unfortunately, they didn’t consider their relationship dynamics in their ‘vision.’ Sometimes, they just lack the natural chemistry and emotional connection. Too often, the focus is on having a great image to share on social media. The couples are less concerned with letting the photographer capture the love that’s naturally there. It’s tough to see a couple so obviously disconnected.” ― Gretchen Wakeman, a wedding photographer in Scottsdale, Arizona

4. There’s infighting among the bridal party.

“It’s a very bad sign when there’s relentless fighting and drama between the bridal party. Here’s an example: On the way to one wedding, less than 10 minutes from arrival, my team received a phone call. It was the bride telling us that the wedding was canceled. She was bitter and telling us that they were just not getting along and there was fighting among the bridal parties and between longtime friends. She mentioned that the best man had sex with a maid of honor who was really a matron of honor, since she was married. There was a brawl between the guys and it was a total chaos situation. We don’t know if they are still together, but I imagine not.” ― Matt Adcock, co-founder of Del Sol Photography based in Playa del Carmen, Mexico 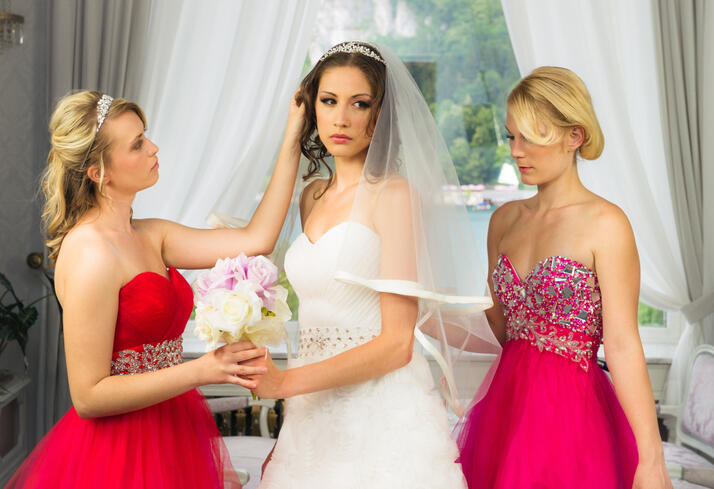 5. The couple isn’t on the same page about finances.

“I’ll call this couple T & M, so we don’t mention their names. As they walked into my studio for me to present my pitch for why they should choose me as their photographer, T asks for a bathroom break. As she walks away, M says to me, ‘This wedding is taking me to the cleaners. Our budget is double what it was at the beginning.’ Money is an important factor in all marriages and often plays a part in why they fail. It was definitely true for this couple. Six months after their fabulous wedding with over 150 guests, they separated.” ― Carlos G. Osorio, owner of Miami Photo in Miami, Florida 6. The couple makes sarcastic digs at each other while taking photos.

“I have captured well over 1000 weddings in my career and I know when I see a couple fighting or bickering throughout the day, it will only get worse and most likely lead to a split. Some couples say they’re just joking with each other but there’s usually some truth behind each dig or joking statement. The worst I have seen was a bride telling my staff, ‘I’m done kissing him.’ So subtle, but very deep and meditated. The groom didn’t say a word and I thought, ‘Wow, it’s already the beginning of the end.’” ― Rob Greer 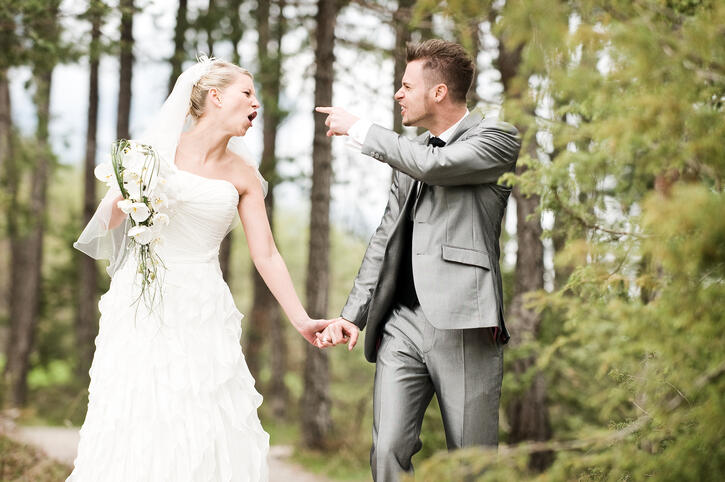 “We have seen couples who are really affectionate and really on each other all night ― and now they’re divorced. I remember a specific wedding where I was with this super young, super fit couple. They had a very physical relationship and it was interesting to watch their body language and how they communicated with each other. At the end of the wedding, they invited me to photograph them in a private room for intimate and sexy photos. By the way they asked me, I wasn’t sure if they wanted me to photograph them or join them. It was an odd feeling and I politely declined, finished my evening and went home. One year after the wedding, they were separated.”  ― Sol Tamargo, co-founder of Del Sol Photography based in Playa del Carmen, Mexico

8. The couple hardly spends any time together at the reception.

“After the wedding ceremony, most couples are excited about the reception. The stress of the wedding day is behind them and it’s time to have fun and relax. Couples normally spend the evening greeting guests, dancing the night away, and celebrating their new marital status. When a couple separates to talk to guests or leaves the other alone on the dance floor for hours at a time, it always raises concerns. I have photographed an entire reception and only captured a handful of images of the the couple together ― that’s a very bad sign.” ― Gretchen Wakeman 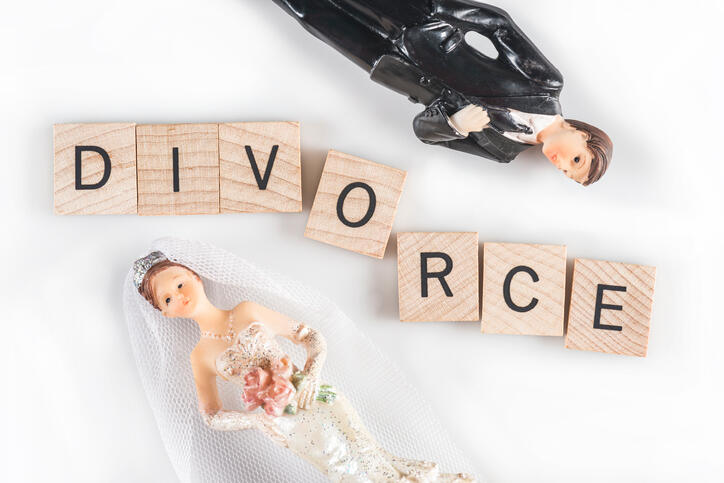