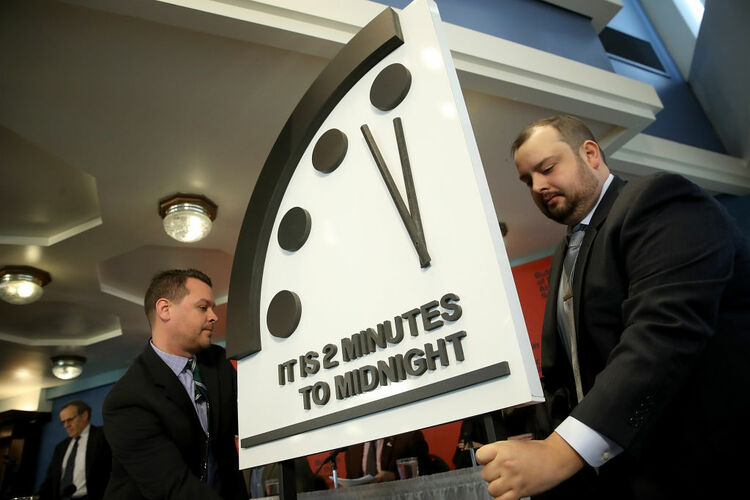 The Bulletin of the Atomic Scientists have advanced the 'Doomsday Clock' by thirty seconds, citing a 'grim assessment' of geopolitical affairs. The symbolic clock is an unofficial representation of humanity's proximity to a man-made global catastrophe, such as nuclear war or global climate change.

Bulletin president Rachel Bronson made the dramatic announcement at a press conference at the National Press Club in Washington D.C. Thursday morning.

“As of today,” Bronson told reporters, “it is two minutes to midnight.”

The clock has its origins back in 1947 when scientists with the Manhattan Project wanted to create a way to warn people about escalating global tensions and unfettered access to world-ending weapons. After advancing the clock by thirty seconds, humanity is currently the closest it has been to the apocalypse since 1953 when the Soviet Union detonated a thermonuclear weapon. In 1991, after the Soviet Union began breaking up, the Doomsday Clock was moved all the way back to its peacetime peak of 17 minutes to midnight.

But thanks to the gradual proliferation of nuclear states such as India, Pakistan, and North Korea, the clock has gradually ticked forward over the years. An accidental missile alert sent to residents in Hawaii earlier this month, only highlighted the recent tensions across the globe, bringing back the fear for many that the world would end in a nuclear exchange.

"To call the situation dire is to understate the danger," Bronson said.

You can watch the announcement by the Bulletin of the Atomic Scientists in the video below:

Posted by Bulletin of the Atomic Scientists on Thursday, January 25, 2018